An annual ruderal plant resistant to drought and harsh conditions. Hoary alyssum blooms from June until winter. The flowers are rich in nectar, and pollen, they are mainly pollinated by sweat bees, and miner bees.

Status in Poland: very common, rarer in the highlands than in the lowlands, although with not very clear status, maybe just indirectly introduced? According to some scientists, the locations in Austria, Poland and Denmark are native, marking the north-west end of the pristine, natural range in Eurasia. 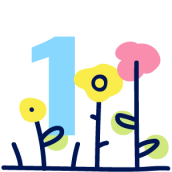 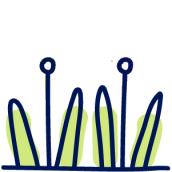 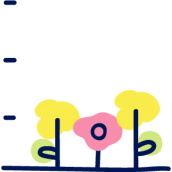 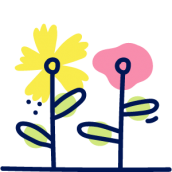 A low or medium-tall short-lived plant, usually only annual, less often short-lived perennial, with a characteristic grayish color. It has its gray color due to thick hairs of several types: stellate, furcate, and normal..

It develops lanceolate leaves, pointed at the tops. Most of the leaves will be entire-margined, only the lower ones have shallow and not very regularly serrated blades. Unlike most crucifers, the lower leaves of the hoary alyssum never form rosettes. From May to August it produces bisexual, four-sepaled flowers with deeply indented, clearly longer than the sepals, white petals. It has six didynamous, yellow-green stamens, and four nectaries at the base of flowers. Single flowers are gathered in a relatively short raceme-like inflorescence. After flowering, the stalks elongate considerably, so the hoary infructescence will be less dense, and longer.

The fruit will be a silicle typical for the mustards family, in this case ovate, flattened parallel to the septum, white hairy, with slightly convex covers, up to 10 mm in length.

Each of the reticular-veined receptacles contains 2-6, occasionally 7 seeds. 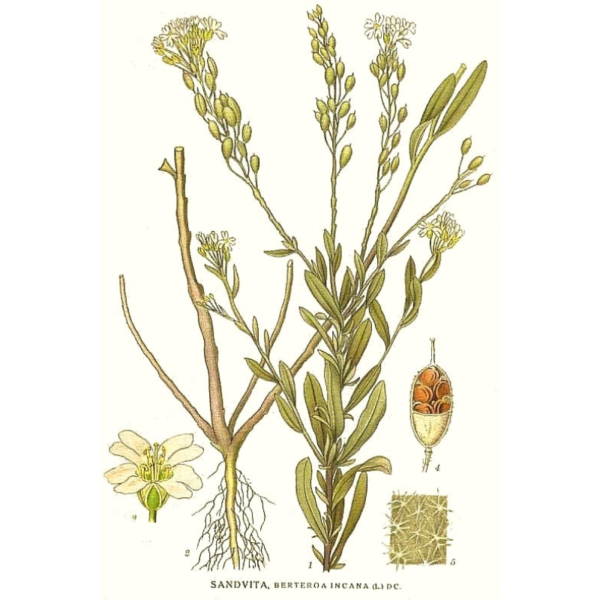 The hoary alyssum will grow perfectly in a sunny place. There are no special requirements for fertility and soil type, although it prefers fertile soil. It perfectly tolerates barrenness and soil contamination with heavy metals, petroleum products, etc., therefore it is sometimes used to reculivate former mines and steel mills areas. It is also used to turf the vicinity of highways and roads.

Before the introduction of B. incana in the composition of mixtures for the recultivation of post-industrial lands, and now also field margins and urban flower meadows, this plant was not cultivated. On the contrary, it was controlled as a poisonous weed for horses.

In North America and Western Europe, hoary alyssum has long been controlled as a plant that is dangerous to horses, especially hot blood racing breeds. Admixture in medick or clover leads to laminitis, intestinal ulceration, fever, diarrhea, pulmonary and kidney edema, the presence of calcium crystals in the urine, and in mares, also to miscarriage. In spite of so many years of fighting hoary alyssum, the poisons affecting horses and the methods of detoxification have still been poorly identified.

The Latin generic name Berteroa was created in honor of the Italian physician and naturalist Charles Louis Joseph Bertero (1789-1831). As a herbalist, Bertero specialized in causing vomiting and laxative species. Botany was his passion. He spent years saving money, he also learned painting (to document the collection at a time when photography was not invented), and then he made a series of trips to the Antilles, Chile, Juan Fernandez Islands, and finally to Tahiti.

Berteroa incana has not been studied so far. In Poland, flowers are eagerly visited by insects (hymenopterans, including bees, hoverflies ecologically imitating bees , and small butterflies and moths). It blooms a long time, from the beginning of summer to the first days of winter. According to some ecologists, hoary alyssum introduced to North America can be dangerous to local pollinators there, although the exact mechanism of reducing the number, and/or weakening the condition of local insects remains unclear. 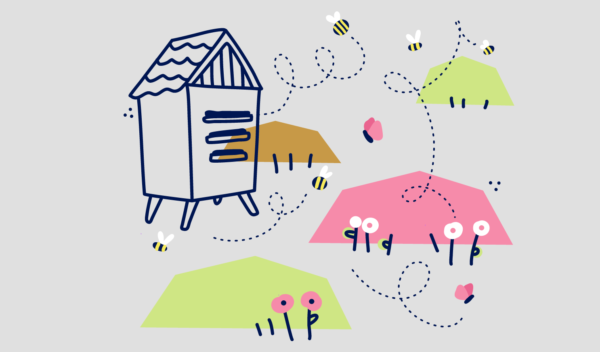